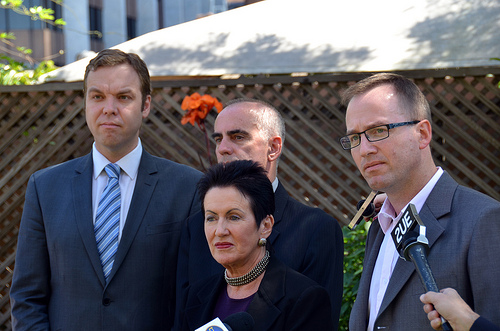 The NSW government has announced legislation which will ban sitting MPs from running in local government elections. The true aim of this legislation is to unseat Member for Sydney and Sydney Lord Mayor Clover Moore, another in what have been constant attacks from Barry O’Farrell in cahoots with the Daily Telegraph.

You can watch this reported on the ABC News here:

The Greens believe that it is not the role of the Parliament to unseat sitting Mayors and MPs via legislation. The voting public of Sydney, not the Premier of NSW, should decide who their representative is.

The Premier disingenuously says this legislation is not aimed at Clover Moore. He wants us to believe it is just a coincidence that of the sitting MPs (including myself) who are local councillors, only Clover has said she is standing again for local council. That’s not a coincidence, Barry, it’s a fix.

Clover Moore has been the state MP for her local area for 24 years, and the Lord Mayor of Sydney for close to eight. If Barry O’Farrell wants to change that, he should get down amongst the community and take Clover on with real policy initiatives to make Sydney better, not try and push her out through imperial trickery.

The Greens will be contesting the local elections, and we want to win. It’s just that we want the election to be fair, not fixed by the Premier of the day.