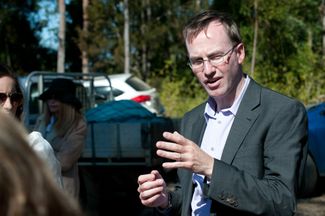 Legislation passed by the NSW Parliament in April allows local councillors to vote on planning proposals in which they have a direct pecuniary interest.

The Government’s legislation allows Councillors to vote on rezoning proposals, changes to development control plans and other broad planning decisions that impacts on land that they own, opening the door to wide-scale, and legal, corruption at a local level.

The Greens are calling on the government to reverse this poor decision and remove this corrupting element from local councils.

451 Disclosure and presence in meetings

(1)   A councillor or a member of a council committee who has a pecuniary interest in any matter with which the council is concerned and who is present at a meeting of the council or committee at which the matter is being considered must disclose the nature of the interest to the meeting as soon as practicable.

(2)   The councillor or member must not be present at, or in sight of, the meeting of the council or committee:

(a)   at any time during which the matter is being considered or discussed by the council or committee, or

(b)   at any time during which the council or committee is voting on any question in relation to the matter.

(3)   For the removal of doubt, a councillor or a member of a council committee is not prevented by this section from being present at and taking part in a meeting at which a matter is being considered, or from voting on the matter, merely because the councillor or member has an interest in the matter of a kind referred to in section 448.

By adding the following:

(4)  Subsections (1) and (2) do not apply to a councillor who has a pecuniary interest in a matter that is being considered at a meeting, if:

(a)   the matter is a proposal relating to:

(i)       the making of a principal environmental planning instrument applying to the whole or a significant part of the council’s area, or

(b)   the councillor made a special disclosure under this section in relation to the interest before the commencement of the meeting.

4)      The special disclosure of the pecuniary interest must, as soon as practicable after the disclosure is made, be laid on the table at a meeting of the council and must:

(a)   be in the form prescribed by the regulations, and

(b)   contain the information required by the regulations.

It will also encourage property owners and property developers to put up their hand to run for Council in September knowing that, if elected, they can vote to improve the development yield on their own land and personally enrich themselves.  In other words it is an invitation to carpet baggers to run for Council.

There has been an issue when Councils are adopting new Council-wide Local Environment Plans that as most councillors own their own home, they have potential pecuniary interest even in maintaining the existing zoning of their home.

This has lead to many councillors seeking an exemption under s458 of the Act from the Minister for Local Government to vote on matters where they have a pecuniary interest.

Acknowledging this, the Greens moved an amendment that provided where the pecuniary interest arose only by reason of the Councillor’s primary residence, that Councillors could disclose the interest and then vote.

The government rejected this amendment.  They gave no coherent reason for doing so.

“No elected official should be allowed to vote on a proposal that leads to their personal enrichment, and I can’t believe the O’Farrell government is allowing local councillors to do this.

“We should be making laws for people, not angels, and this absolutely holds true for local councillors.

“Why should a local councillor be able to vote to rezone their own land and receive windfall profits, it is nothing short of an abuse of office.

“Local government is only just getting past the stench of the planning scandals in Wollongong, and now any self interested councillors has been given the green light to vote to up-zone their property.

“Heaven help us come the September local council elections now that the door has been opened for carpet baggers and property developers to get themselves elected and then do their own dirty work on Council.

“Unfortunately just declaring a pecuniary interest is far from adequate and there are plenty of people who would wear a harsh headline in their local paper, if it meant delivering themselves a million dollar windfall from a rezoning decision.

“The government needs to reverse this poor decision and remove this corrupting element from local council decision making.

“This government was elected on the promise of more accountability, not less, but it seems at every turn they are failing to live up to their pre-election rhetoric,” Mr Shoebridge said.