Barry O’Farrell’s Cuts to Workers Compensation – GET THE FACTS 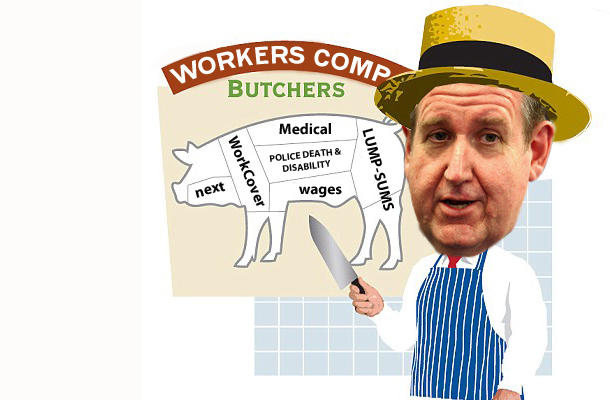 Barry O’Farrell’s Workers Compensation Amendment Bill was rushed through the NSW Parliament in less than 72 hours. The final vote on it was taken at 2:40am early Friday morning, 22 June. The Greens and Opposition opposed it.

The Bill was preceded by a sham Parliamentary Inquiry, dominated by the Shooters, CDP and Coalition, and which reported just 11 days after it was established. Any genuine inquiry would have taken at least 6 months. The committee received 353 detailed submissions and held public hearings over just three days.  Unsurprisingly, the Committee report called for savage benefit cuts.

The Bill for the first time will see incapacitated workers being cut off weekly benefits, with most workers having a maximum entitlement to 2.5 years of payments.  Many will be forced onto Centrelink benefits and into poverty.

Workers lost their compo coverage for injuries suffered when going to work and coming home.  Fred Nile moved an amendment to the current law that abolishes all journey claims unless there is ‘a real and substantial connection’ between the work and the accident. This means 99% of journey claims will still be lost.

Find out about the $1.6 billion black hole in WorkCover

All entitlements to medical expenses will be cut off after 12 months from the date of claim – or if a worker receives weekly payments, 12 months after they are cut off from weekly payments. This is despite most having medical needs.

This will result, for example, in injured workers who need prosthetic limbs or hearing aids being unable to replace them when necessary.  Even catastrophically injured workers will lose the right to medical expenses, such as nursing assistance and medication, once they turn 68.

No one who loses a loved at work will now be able to claim for nervous shock, no matter how severely their lives have been damaged.

Entitlements to lump sum compensation for impairment have been abolished for all injuries unless the WPI assessment is greater than 10%.  This will prevent lump sum claims being made for injuries such as industrial deafness, most back injury claims and an entire shoulder reconstruction.

Compensation for pain and suffering injured workers endure (as opposed to impairment) has been completely abolished.

The changes are even more drastic when you realise that they almost entirely retrospective, applying to almost all prior injuries, even where workers have long settled their cases. People have made choices affecting the rest of their lives based on the way the system worked. It is completely unprincipled for Barry O’Farrell to throw these people’s lives into turmoil by retrospective legislation.

WORKERS LOSE OUT ON LEGAL COSTS

To add insult to injury the Bill removes injured workers’ ability to have their legal costs paid – even where they win their legal case.  They now have to pay all their costs from their own pocket.  Most injured workers cannot afford the legal fees to challenge a well-heeled insurance company so they will simply not run their cases.

A REPRIEVE FOR EMERGENCY WORKERS

While continuing to oppose the legislation, The Greens secured last-minute amendments that mean that firefighters and paramedics will be excluded from these savage cuts.

NO CUTS TO INSURANCE GOUGING

Among all the changes made, nothing has been done to contain the sky-rocketing fees paid to private insurers to manage claims, one of the real reasons that the scheme is in the red.

Astoundingly the bureaucratic nightmare that is WorkCover gained expanded powers to further mismanage the scheme with these law changes.