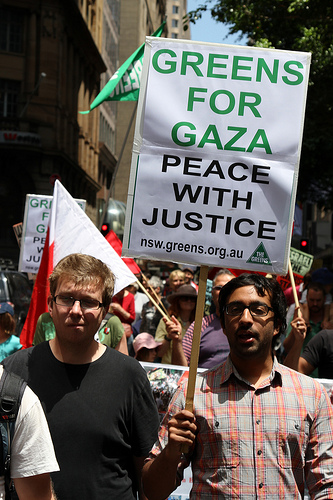 Following is a speech delivered by David in the NSW Legislative Council on Thursday 14 march 2013. The full debate can be found online here.

Mr DAVID SHOEBRIDGE [10.28 p.m.]: I speak to this motion and note at the outset that it is a very unbalanced one. Indeed, a member asked if The Greens took part in this study mission to Israel. As far as I am aware, no Greens member of Parliament went on this study mission. That was primarily because of the one-sided nature of the itinerary, which is reflected in the one-sided nature of this motion.

In a motion that purports to talk about building an understanding of the complex and various issues impacting on Israel and other jurisdictions within the Middle East, it is extraordinary that in the more than 100 words and five paragraphs of this motion not one word is mentioned about Palestine or the Palestinians. The human rights of the Palestinians are airbrushed out of the motion, just as they were airbrushed out of the itinerary of the study tour that travelled to Israel and some very small parts of the West Bank.

Having heard the contributions of members who went on the study tour and having read the motion, I can see that this is little more than a public relations exercise for the Israeli Government. Indeed, this public relations exercise has been run in part through the offices of the NSW Jewish Board of Deputies which arranged the tour and, I understand, partly paid for the study trip to Israel.

For the record, I do not recall getting an invitation from the Jewish Board of Deputies for this visit. However, had I received one I would not have accepted the invitation to go on this study trip because of the extraordinarily one-sided itinerary provided to members.

How could members go there and meet with only one of the legislative bodies, the Knesset, and ignore the Palestinian Legislative Council? How could members, who wanted to get a balanced understanding of the issues facing Israel, Palestine and the Middle East, go to the other side of the planet and fail to visit Gaza, the world’s largest outdoor prison?

How could members not go to see the way the Palestinians live under the illegal blockade or not speak to the local health workers about the conditions in Gaza, or the paramedics about how they respond to the impacts of aerial bombardments by the Israeli military?

If they had visited Gaza they would have been able to see the X-rays that the Gaza doctors show of children’s kidneys riddled with kidney stones because of the saline water they are required to drink. The Israeli wells on the edge of Gaza are stripping out the fresh water from the arterial basin and the arterial basin is filling up with saline water from the sea. That saline water fills the wells. Most of the water treatment plants have been destroyed by Israeli bombardments and almost every child in Gaza has kidneys riddled with kidney stones and ongoing health problems.

If they had gone to Gaza surely they would then have gone to the West Bank and outside Bethlehem and Jerusalem and spoken to Palestinian villagers whose lives and livelihoods have been destroyed by the apartheid wall. Talk to the farmers whose olive groves have been cut off by the illegal apartheid wall, who cannot get to the fields that generations of their family had previously tended because of an illegal apartheid wall built by Israel through the middle of their homes, villages and farms.

Surely members could also have met with Israeli peace activists, such as Jeff Halper from the Israeli Committee Against House Demolitions, and spoken to Palestinians who have been illegally evicted from their homes and land to make way for internationally condemned settlements being built by the Israelis.

But, no. Members spoke to the Israeli settlers but they did not visit and speak to the people who have been evicted illegally for these internationally condemned, unlawful settlements that are now riddling the West Bank.

How could members not have travelled to Hebron and done the Breaking the Silence tour, where former Israeli soldiers would have told them about what goes on in the occupied territories, about the violence and the discrimination perpetrated by the Israeli military and the settler movement against the native Palestinian population?

Or were they Israeli voices that members wanted to edit out and not hear? The inconvenient truth.

Mr DAVID SHOEBRIDGE: It is the inconvenient truth of the illegal, violent, discriminatory and brutal occupation in the West Bank.

DEPUTY-PRESIDENT (The Hon. Paul Green): Order! It is disorderly to interject.

The Hon. Dr Peter Phelps: What is the right of return for Vietnamese refugees?

The Hon. Lynda Voltz: Point of order: Members speaking in this debate have been heard in silence. Some members may not agree with other views expressed in the Chamber, but members should be allowed to express their views in a democratic way. I ask you to stop members of this Chamber from yelling down other members with whose views they may disagree.

DEPUTY-PRESIDENT (The Hon. Paul Green): Order! There is a motion on the floor and members are entitled to share their views.

The Hon. Dr Peter Phelps: I’m just reminding him that there are two sides to the story.

DEPUTY-PRESIDENT (The Hon. Paul Green): Order! There are diverse views in this Chamber and, in terms of protocol, they are entitled to be heard in silence.

Mr DAVID SHOEBRIDGE: How could members not visit those Palestinian refugee camps in neighbouring countries such as Lebanon, where Palestinian refugees from 1948, 1967 and beyond live in sub-standard Third World conditions and are denied their human right to return to their homes? Members did not speak to them, see their title deeds and see the keys they still hold for the homes that were taken from them in the illegal occupations and evictions that have been taking place for decades in that part of the world?

It is extraordinary to note that Labor members, one of whom is notionally from the Left, visited Israel and small parts of the West Bank but did not travel to Nablus and meet with any of the Palestinian trade unions. How could members have travelled over there and not spoken to the firefighters in the Nablus fire station who were locked into their compound by Israeli tanks and snipers and prevented from doing their job as firefighters? They were prevented from saving the lives and homes of their families and friends for days and days as homes burned; children and other people died while the Israeli military shelled and burned their city around them.

For members who went on such an unbalanced tour and failed to see the balanced truth, the oppression the Palestinian people face daily as a result of the illegal occupation of Israel, and to support this motion and preach to the rest of the Chamber about truth, understanding, peace and non-violence is extraordinary.