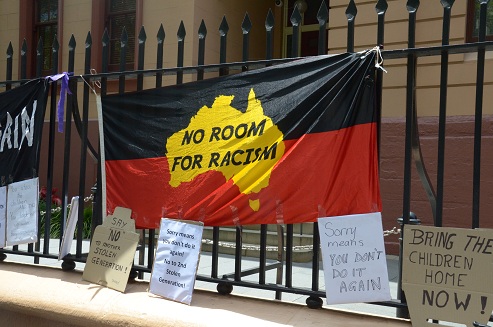 The removal of Aboriginal children from their families and kin continues to be occur across Australia at rates that are frankly disgraceful. 17 years after the defining Bringing Them Home report and 6 years to the day after the Prime Minister issued a tear filled apology for mistakes in the past – the story hasn’t changed.

After being contacted by affected families, I traveled to Gunnedah last week to hear the local community’s concerns, and get a better understanding of the issues.  I have seen the statistics on child removal and, as you can see from below they are deeply troubling.

However putting faces to the families, hearing directly from the mothers, fathers and grandparents who have lost their children really puts it in perspective.

These are the facts for NSW:

These are the facts across Australia:

For each of the last five years, approximately a thousand Aboriginal children have been coming into the ‘out-of-home care’ system long-term. This is a higher number than were removed during any time in the twentieth century. Half of the children have not been placed with kin or relatives.

While Kevin Rudd was apologising for the past Aboriginal children were being taken in numbers greater than at any time in the 20th Century.

There are concerns that recent changes to child protection legislation in NSW may even exacerbate this situation. My colleague Jan Barham details concerns with these changes on her website here: http://www.janbarham.org.au/2013/12/fact-sheet-troubling-proposals-new-child-protection-legislation/

The families I spoke to in Gunnedah have now agreed to break the silence. The women from that town have formed a new group called Grandmothers against Removal and they and their supporters came to the NSW Parliament today to speak out against the policies tearing their communities apart.

It was inspiring to see these women, tough, capable and strong, demanding the return of their children.

They can’t stand alone any more.  It’s time we all joined with them and demanded support for their families and lasting solutions, not forced removals.

You can see some reporting from the ABC here.

ABC PM interviewed with some of the grandmothers, as well as the Minister for Community Services Pru Goward and David – you can listen to this interview on their website here.