Government sneaks through further wages cuts under cover of budget 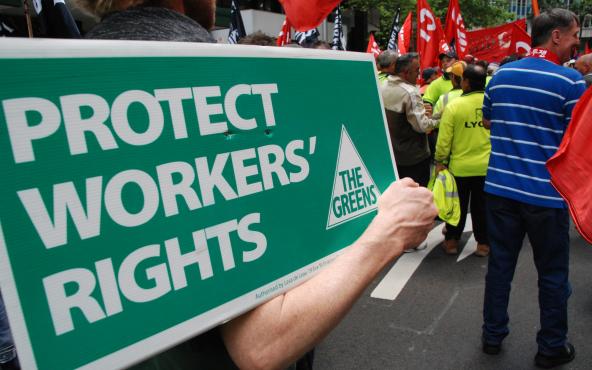 Last week buried deep in the legislation for the NSW budget was the: State Revenue and Other Legislation Amendment (Budget Measures) Bill 2014. In the last two pages of this bill was something that should not have been in the budget: a deceitful move by the Baird Government to incorporate compulsory superannuation increases in public sector wages.

This change means that the federally mandated increases to superannuation that will kick in over the next few years will now come directly out of public servants pay packets.

This is despite the fact that the Parliament had previously voted that they could not do this, and challenges to the laws in the Supreme Court by NSW unions. The change was hidden away on page 30 of the bill, and not mentioned in any of the Government speeches on the budget. Put simply, they snuck it through.

Unfortunately as the Greens NSW Industrial Relations spokesperson I did not pick this up in time. This is at least in part due to the limited resources the Greens have in the NSW Parliament, especially in a busy budget week.

We should have picked it up, we normally do see these underhanded attacks. We all feel pretty poorly that we missed this and are genuinely sorry.

This post is then a call for support across the progressive movement to keep an eye on this underhanded government, and ensure they cannot get away with stunts like this in future. The task of holding the Government to account is one in which we must all be engaged together, working collectively and collaboratively.

I can tell you now that if anyone had seen this and alerted us to it, we would have worked to get the numbers in the Upper House to reject it.

There is a simple reason that we oppose this – wages and superannuation are simply not the same thing. Public servants cannot buy groceries with their superannuation, and the already unfair cap on public sector wages will mean that actual pay will reduce as superannuation contributions are required to increase.

By the time superannuation contributions have increased from 9% to 12% this single change will mean the Government will pocket an additional $800 million a year of public servants wages.

We condemn the Government in the strongest possible terms for sneaking this clearly non budgetary measure into the budget bills. The Greens will continue to work against the agenda that seeks to destroy the wages and conditions of public sector workers, from teachers and nurses to park rangers and police.

But we could always do with a hand here and any tips, advice or forewarnings you have are welcomed. Contact
[email protected] or call us on 9230 3030.