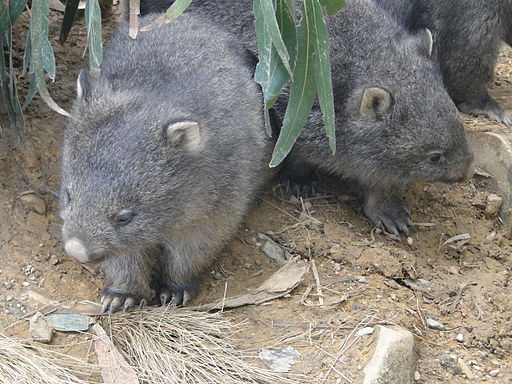 David used Budget Estimates this week to question the Minister for Primary Industries Katrina Hodgkinson about the cruel destruction of wombat burrows in Glenbog State Forest. When Minister Hodgkinson was asked about the mindless destruction that occurred during the logging operations, destruction that resulted in a number of wombats being buried alive, her response was evasive and utterly without concern for the plight of these native animals.

Last week it was reported that a number of wombats were buried alive in their burrows by Forestry Corporation during operations at Glenbog State Forest.

In an attempt to protect the wombats from unnecessary harm, members of the Wombat Protection Society had previously met with Forestry Corporation and advised them of the exact GPS coordinates of the 150 wombat burrows in the area. They even went so far as to mark the burrows out with high-visibility paint and fluorescent marking tape to safeguard the wombats’ habitat.

Despite assurances from Forestry Corporation that the logging would not obstruct wombat burrows, it was found that loggers ignored the markings and indiscriminately felled trees, moved earth and filled the burrows with loose soil that effectively buried the wombats alive in their burrows. Some 11 burrows were buried in this way before the logging was stopped.

The CEO of Forestry Corporation, Nick Roberts, has denied any wrongdoing in the Glenbog State Forest logging operations, claiming that no wombats have been buried alive or have been harmed in the harvest area. However, Scott Hansen, Director General in the Department of Primary Industries claims that out of the 150 marked burrows, 11 had been ‘disturbed’ by the logging operations.

Minister Hodgkinson, however, assured the committee that timber harvesting in NSW is subject to stringent regulation and that ‘while effort has been made to avoid burrow entrances, some disturbance to a small number has been unavoidable’.

The Minister gave this evidence without seeming to care that each and every burrow had been marked with high visibility tape and paint and the GPS co-ordinates were given.

When the Minister and the bureaucrats were pressed on what “disturbed” meant this was the evidence:

Mr DAVID SHOEBRIDGE: When it said a number of burrows had been disturbed, what did that mean? Does that mean buried?

Mr DAVID SHOEBRIDGE: Basically, though, the wombat cannot get out. Is that right? That is what it means; that is a summary of it?

Mr HANSEN: Yes, that the access has been impeded in one way or another. The information we have is that of the 150 burrows that have been marked, it is alleged that 11 have been disturbed, and that is what is currently under investigation.

Mr DAVID SHOEBRIDGE: How did it happen, Mr Hansen, through you, Minister, that despite them being given the GPS coordinates, 11 of them were, to use the euphemism that you apply, disturbed?

Ms KATRINA HODGKINSON: I would say that the word “disturbed” is the appropriate word at this point in time and Forestry Corporation—

Mr DAVID SHOEBRIDGE: I do not mean to debate the word; I just want to know how it happened.

For those who have the strength to see more from this Minister, the full transcript from the Primary Industries Budget Estimates Hearing is available here.