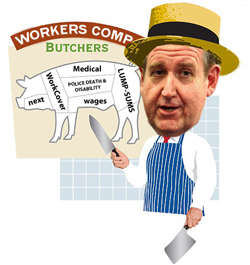 The “Review of the inquiry into allegations of bullying in WorkCover NSW” is currently accepting submissions until the 17 October 2014, with the committee’s final report due by the 11 December 2014.

We strongly encourage interested parties to consider making a submission to this inquiry.

Submissions may be lodged online on the Parliamentary website here.

They can also be posted to:

This inquiry is a current Legislative Council inquiry conducted by the General Purpose Standing Committee No. 1. This inquiry was established on 11 September 2014, to inquire into and report on the implementation of the recommendations of the committee’s Report No. 40 entitled “Allegations of bullying in WorkCover NSW”, dated June 2014.

The recommendations from the June 2014 report are as follows:

That the WorkCover NSW Executive Team and the Safety, Return to Work and Support Board make a public statement that genuinely:

That the WorkCover NSW Executive Team sincerely apologise to Mr Wayne Butler for how he was treated during his investigation, for his dismissal, and for their failure to accept the findings of the NSW Industrial Relations Commission.

That WorkCover NSW report to the Safety, Return to Work and Support Board on actions to be taken to address the punitive use of process within the organisation, especially in human resources matters.

That the Minister for Finance and Services review the structure and functions of the Safety, Return to Work and Support Board to determine whether they are appropriate or expansive enough to cover the board’s obligations under the Work Health and Safety Act 2011, including its obligation to ensure that WorkCover is addressing its organisational problem with bullying. Further, that in undertaking this review, the Minister consider whether it is feasible for all these functions to be undertaken by the existing board.

That WorkCover NSW report to the Safety, Return to Work and Support Board on the progress
of all actions arising from the recommendations of this inquiry, at intervals of at least six months,
and that these reports be published on WorkCover’s website.

That WorkCover NSW formally review, in liaison with the Public Service Association of NSW,
the findings of the 2013 People at Work Survey and other measures of workplace bullying, with a
view to collecting, monitoring and publicly reporting reliable data on workplace bullying within
the organisation on an annual basis.

That WorkCover NSW ensure that all investigations of bullying complaints within WorkCover are investigated independently.

That WorkCover NSW undertake a formal evaluation of the arrangements with the Department of Trade and Investment, Regional Infrastructure and Services for referral of work health and safety matters for investigation, including allegations of workplace bullying, within two years of the commencement of the arrangements. The review, which must be published, is to:

That WorkCover NSW ensure that the code of conduct for WorkCover and scheme agent staff is enforceable by individual workers and their representatives, and that financial penalties are included as one of the remedies where breaches of the code are established.

That the Parliament of New South Wales enact laws which protect all workers in the state, including injured workers, from workplace bullying, and that such laws be based on the National Occupational Health and Safety Commission’s Draft National Code of Practice.

That the Minister for Finance and Services and the Safety, Return to Work and Support Board establish an independent workplace bullying steering panel to oversee the actions of WorkCover NSW in addressing workplace bullying, both within its own organisation and in other workplaces as the state regulator of work health and safety. The panel must be empowered to require action on its recommendations and sufficiently resourced to perform its role.

That General Purpose Standing Committee No. 1 conduct a review in late 2014 of the implementation of the recommendations of its 2014 report into allegations of bullying in WorkCover NSW.

Submissions may be lodged online on the Parliamentary website here.