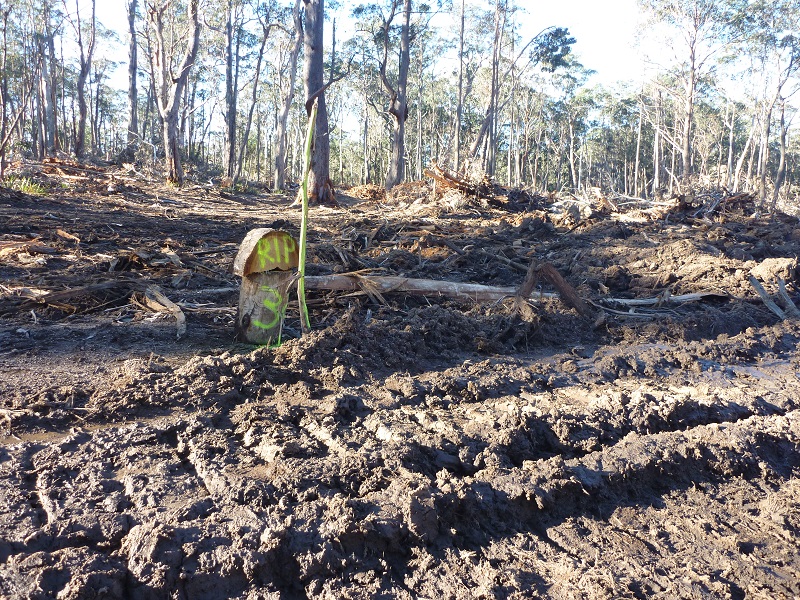 In August this year a number of wombats were buried alive in their burrows during logging at Glenbog State Forest.

When the Minister for Primary Industries was asked by David in Budget Estimates about these destructive logging operations her response was evasive and utterly without concern for the plight of these native animals.

David has since visited the site in Glenbog Forest where he met with Marie and Ray Wynan from Wildlife Rescue Far South Coast and saw for himself the cruel and unnecessary destruction. The visit has only strengthened the Greens NSW commitment to protecting our forests and the animals that live in them.

Last night David spoke in Parliament on this issue and called for far greater protections for native animals in any logging of native forests. Below you can also see images and videos taken during the visit (warning pictures of very cute rescued animals and very distressing damage from logging):

Yesterday morning I visited Glenbog State Forest in the south of New South Wales to join local wildlife carers and forestry protectors to examine the impact of recent logging operations on the forest and in particular on the wombats which make that forest their home. Glenbog State Forest is located between Nimmitabel and Bemboka just off the Snowy Mountains Highway. While there I met with Marie and Ray Wynan from Wildlife Rescue Far South Coast [WRSC]. Marie and Ray run their wildlife rescue operation from their property next to Glenbog State Forest. They were directly involved in recording the location of wombat burrows in the forest before logging operations commenced earlier this year.

Bare-nosed wombats live in temperate regions down the south-east coast of Australia and Tasmania with a preference for wetter, forested regions that are relatively cool. They are present in large numbers in the Glenbog State Forest where hundreds of burrows have been identified by Wildlife Rescue Far South Coast. The locations of the wombat burrows were clearly marked by Marie and Ray with high-visibility fluorescent markings and bright yellow tape. The GPS locations of the burrows were then recorded and all these details were provided to the Forestry Corporation and its logging contractors in order to ensure that logging activities could avoid damage to wombat burrows. Further agreement was reached with the Forestry Corporation that it would call WRSC if it saw injured wombats and that movement of large logging trucks would be seriously restricted at those times that wombats are most active, namely dawn and dusk.

The Forestry Corporation was under no obligation, other than a moral one, to undertake steps to protect these wombats. Because bare-nosed wombats are not an endangered species there are no licence conditions that oblige loggers to provide any protections for them. They are irrelevant in the eyes of the State’s forestry legislation and the Forestry Corporation. Much to the frustration of the Wildlife Rescue Far South Coast and to people across the world, the logging contractors in Glenbog ignored the markings and GPS coordinates provided by Marie and Ray. They constructed logging roads directly over wombat burrows, filled other burrows with debris, collapsed the entrances of other burrows with heavy machinery and entirely covered some burrows with discarded logs and timber.

There can be no question that this has caused the completely unnecessary death of wombats by either slow suffocation or starvation. We have heard that this affected an estimated 11 burrows in the coops where logging had commenced. Marie and Ray tell me that when they raised this issue initially with contractors they received short shrift. They were asked why they were worried about these animals because they are not endangered; they are just wombats. When I asked the Minister in the estimates hearing whether future operations could avoid harvesting in the vicinity of wombat burrows she answered in the negative and then said:

The harvest plan instruction in Glenbog State Forest was to avoid damage to wombat burrows as far as practicable, not to avoid harvesting in the vicinity.

She even quibbled about the terminology used, saying the burrows had been “disturbed”, admitting that this meant that “access has been impeded in one way or another”, but refusing to admit that this meant the wombats had essentially been buried. Thankfully, her bureaucrats were more honest.

It is extraordinary to think that this could happen in one of our State forests. It is even more extraordinary to learn that the actions of the contractors in this instance may not even have amounted to a breach of the conditions attached to their licence. We should be working towards best practice in our forestry activities, including a fundamental recognition of the need to mitigate the dangers from logging operations to native animals—all native animals. For too long we have accepted the routine and wide-scale killing of non-endangered native animals such as sugar gliders, eastern grey kangaroos, swamp wallabies and bare-nosed wombats as a part of forestry operations. It is clear that this position is inhumane and unsustainable.

While we have a particular responsibility to protect endangered animals and endangered ecological communities, our obligations must go beyond this and extend to all native animals who live in our native forests. Our unique native animals should not be slaughtered for a couple of tonnes of loss-making timber. As it currently operates it is no exaggeration to say that logging activities can amount to the industrial killing of native animals with little risk of investigation and no sanction. It must be a condition of the Integrated Forestry Operation Approvals [IFOAs] that all native animals—endangered or not—are considered before any logging takes place and that all reasonable steps are taken to minimise the impact on these animals. This is a timely matter for consideration, given the fact that the Government is currently in the process of remaking the coastal IFOAs for the Eden, southern, upper and lower north-east coastal regions of New South Wales. At a minimum, ensuring that bare-nosed wombats are protected from having their burrows routinely bulldozed by forestry contractors would be an urgent and necessary part of this remake.

I conclude by thanking Marie and Ray for taking me around Glenbog and for introducing me to the rescued wombats and joeys currently in their care. Anyone who has seen Marie nursing Willow, a 10-kilogram injured wombat, on her knee while feeding him a bottle could not help but want to support this work. I also thank Harriet Swift, John Perkins and all the wonderful forest protectors who are part of the South East Region Conservation Alliance Inc. for their continued work in our forests. I have nothing but admiration for the selfless volunteers and activists who work to protect animals and the native forests in which they live. As a Parliament we should do everything we can to support them in this work.

You can see pictures and videos from David’s trip to Glenbog below: