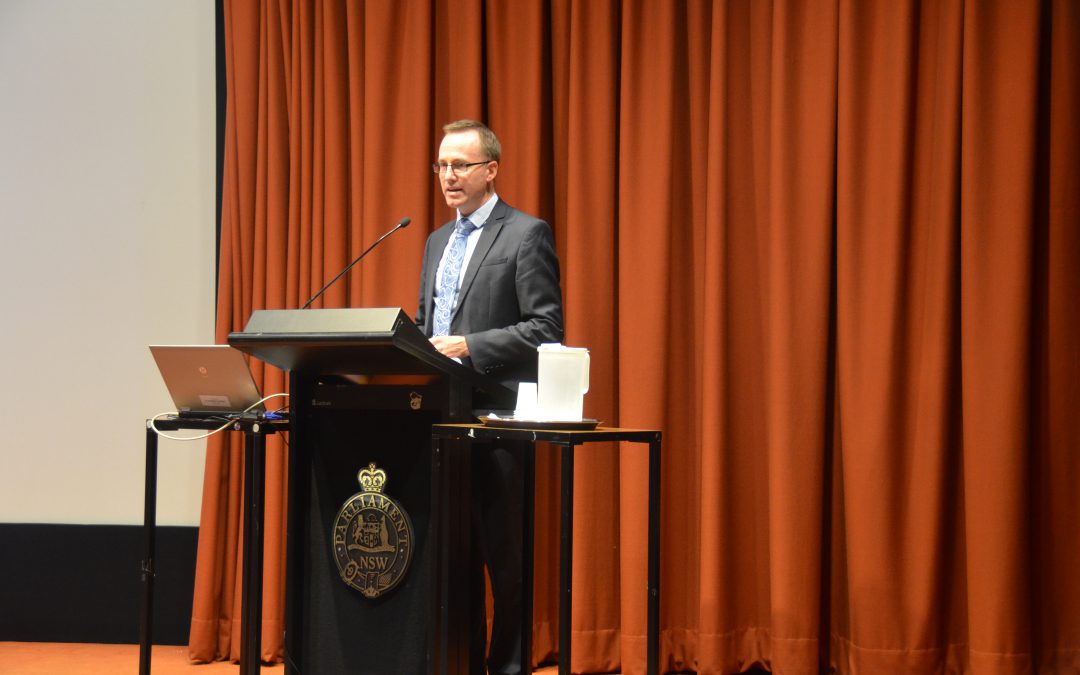 On Tuesday 2 December David hosted a Parliamentary Forum to break the silence and highlight the need for comprehensive reform in how psychologically injured police are treated.

Far too many NSW Police police officers have been shunned, isolated and left without meaningful assistance after suffering psychological injuries at work.

The forum heard from Rachel Clark and Peter Klein about their experiences as police officers who had suffered psychological injuries as a result of their duties. Peter is a medically retired NSW police sergeant who spent two decades on the frontline of policing. Despite strong evidence supported by medical assessments, Peter’s PTSD claim was declined. Peter made the important point that the current insurance system is so careful not to pay a single false claim that it sacrifices ten or more genuine officers in the process. Rachel has suffered chronic PTSD as a result of her work in the child protection squad but had her claim was rejected after covert surveillance from Metlife. Rachel raised serious concerns that insurance companies such as Metlife use surveillance in a totally inappropriate way. One appalling example of the abuse of covert surveillance was following injured police undertaking social activities that have been recommended to them by their treating psychiatrist, and using that footage to refuse a claim.

John Cox is a principal lawyer of Slater + Gordon lawyers who practices in police compensation leading, Slaters Police compensation team. John spoke strongly on the need for both the Government and Metlife to reform the damaging adversarial claims process. Individuals shouldn’t have to commence legal action to access the insurance benefits that they are entitled to and have paid for. Josh Mennen is a Senior Associate at Maurice Blackburn Lawyers, and specialises in superannuation and insurance claims.  He has represented many injured police officers in their claims with Metlife under the First State Super and BlueRibbon insurance schemes. Josh raised concerns that MetLife’s strategy of aggressively delaying or declining claims appears an intentional strategy to wear claimants down. It is a process designed to make individuals abandon or compromise their claims – Josh argued that for claims to take 2-4 years is simply unacceptable.

The panel of medical professionals raised a number of serious concerns regarding the way that the current system treats injured police officers and what types support and training services need to be in place to manage and prevent trauma and stress. Dr Hugh Morgan explained how there is a significant lack of understanding about how PTSD can become chronic and also discussed the distressing impacts of surveillance. Surveillance is relentless, pointless and seemingly deliberately designed to challenge people.  Anne Lucas discussed how we need to start treating officers with compassion and dignity, and made a number of important suggestions on how to change the current treatment process and in particular the need for genuinely independent experts who have a holistic approach, who understand the unique role of the police and are focused on recovery rather than approving or denying a claim. Dr Greg Wilkins explained that the process itself has become the focus rather than wellness of individual. It is not independent and fails to consider the history of trauma officers might have experienced.

Kate Carragher and Deborah Bryant spoke passionately about their own personal experiences as the wives of police officers with post traumatic stress. Kate’s marriage broke down after her husband broke down from the effects of the disorder and was crucially affected by the government’s 2011 Death and Disability cuts. Kate made the important point that sending police to deal with murders and rapes without psychological support is like sending them unarmed to a gunfight. Deborah spoke about her life as a police wife for 22 years, her children’s life as police children and her family now as police legatees. Deborah’s husband Ashley took his own life last year after a battle with PTSD. Both Deborah and Kate are calling for the names of police officers who have committed suicide as a result of their service to be included on the National Police Honour Roll.

Many of the speakers and participants agreed that there needs to be a Parliamentary Inquiry into police psychological injuries and suicides and this is something that our office committed to campaign for in Parliament.

Our office is now in the process of considering in detail all the contributions made to the forum. This includes the many valuable thoughts that came from the floor following the end of the formal presentations. We will be consulting with all the speakers before publishing the outcomes and what we hope will be a practical road map for reform for the treatment of police psychological injuries.

Matters that were squarely raised in the forum and which we will be closely reviewing for the recommendation included:

We hope that through this forum we have taken one positive step along the way to achieving justice for injured police.

Speaking notes and materials from the forum:

Find out more about this important issue:

– MEDIA Police on the scrap heap: Call for inquiry into mental health

– PREVIOUS WORK ON THIS ISSUE Death in the line of duty: breaking the silence on police psychological injuries