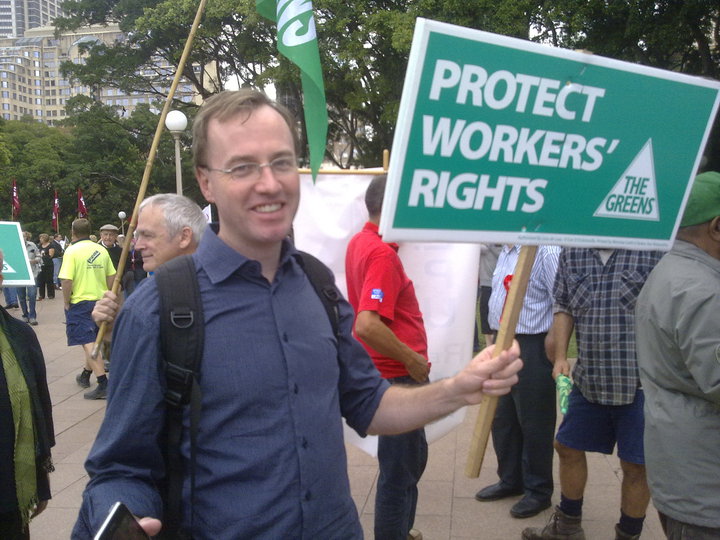 The Greens support the PSU, ACTU and CPSU in their complaint to the International Labour Organisation, arguing that the Government has breached international labour standards by placing an arbitrary cap on public sector annual wage increases, and prohibiting public servants from accessing the independent  Industrial Relations Commission (NSW).

The Greens have opposed these restrictions on collective bargaining from the start, and look forward to better outcomes for workers as a result of the unions’ action.

“I welcome the unions’ complaint to the ILO.  In 2011 I argued in Parliament for 6 hours that this amendment was an attack on unions and a breach of our international convention obligations, and it’s still true today.

“The NSW Government would like to degrade industrial action protections across the board; it just happens that they have particular power to legislate against public sector employees.

“It’s a direct conflict for the government to have this power over  public service employees when it is both the employer and the legislator.

“No other sector is prevented from taking collective action against unfair wage outcomes.

“Simply because the NSW Treasurer says a 2.5% wage increase is fair, doesn’t make it so.

“The real cost of living for many people in NSW is routinely above 2.5%, but these draconian laws mean public sector workers effectively can’t bargain for more.

“Frankly NSW labour laws, with the Coalition Government’s ongoing attack on unions and collective bargaining, would be more at home in Belarus or Bangladesh than Beecroft or Ballina.”

An abridged version of David’s speech to the Legislative Council can be found here, but here’s his favourite bit:

Mr DAVID SHOEBRIDGE: This legislation is not only a betrayal of promises that were made during the election campaign but also a fundamental attack on the working conditions of public sector workers in New South Wales. This legislation also offends international conventions ratified by the Australian Government. It offends some of the most fundamental international conventions, such as the Right to Organise and Collectively Bargain Convention—a convention that was entered into by our Federal Government in 1949. The convention states in article 2:

It also states in article 4:

Measures appropriate to national conditions shall be taken, where necessary, to encourage and promote the full development and utilisation of machinery for voluntary negotiation between employers or employers’ organisations and workers’ organisations, with a view to the regulation of terms and conditions of employment by means of collective agreements.

That is a pretty fundamental right that has been enshrined in the convention since 1949. The convention also states in article 3:

Machinery appropriate to national conditions shall be established, where necessary, for the purpose of ensuring respect for the right to organise as defined in the preceding articles.

What right could be more fundamental than the right to organise and collectively bargain? That was established in 1949 and ratified by the Australian Government. But that right will no longer be respected in New South Wales when this bill is passed. The New South Wales Government feels that it can just chuck this right out.

The Hon. Scot MacDonald: Point of order: The bill does not address collective bargaining.

The PRESIDENT: Order! The member’s comments are within the leave of the bill.

Mr DAVID SHOEBRIDGE: There is a list of countries that have ratified the convention. I will not try the patience of members by reading the whole list because that would be unfair. Instead I will provide a sample of countries that have ratified the right being trampled by this Government with this legislation. Albania has the right, but not New South Wales. The citizens of Azerbaijan have the right, but not the citizens of New South Wales. They have got it in Barbados, Belgium, Belize and Benin, but they will not have it in Beecroft.

The Hon. Jeremy Buckingham: Or Bankstown.

The Hon. Jeremy Buckingham: But not Boggabri.

The Hon. Rick Colless: How about Canada?

Mr DAVID SHOEBRIDGE: I note the interjection from the Hon. Rick Colless. I was concerned that they do not have the right in Canada. That is a very astute observation by the member. If the member is concerned that I might miss another country, I am happy to read the full list onto the record.

The PRESIDENT: Order! Previous Presidents have made rulings to the effect that members should not attempt to read comprehensive lists onto the record; instead, they should give a precis of a number of examples.

Mr DAVID SHOEBRIDGE: I respect the President’s ruling and I was attempting to give a precis. That is why I did not address the lacunae in the list being the absence of Canada. I probably could address the lacunae only by reading the list in full but that would mean canvassing the President’s ruling. I will not do that even if invited. They will have this right in Haiti, Honduras and Hungary.

The Hon. Greg Donnelly: But not Hurstville.

The Hon. Jeremy Buckingham: Or Ku-ring-gai.

Mr DAVID SHOEBRIDGE: They most definitely will not have it in Ku-ring-gai. They will have it in Malta, Mauritius and Mauritania, but not in Mallacoota.

The Hon. Helen Westwood: Not Merrylands.

Mr DAVID SHOEBRIDGE: They will not have it in Merrylands, Mulgoa or Mullumbimby. Rest assured they will have it in Morocco and Mozambique.

The Hon. Greg Donnelly: But not Manly.

Mr DAVID SHOEBRIDGE: The poor burghers of Manly will not have it. They will have it in Romania and Rwanda but it will not be in Randwick. Mr Bruce Notley-Smith will be very concerned that the people of Randwick will not have the industrial rights that the people in Rwanda have. These rights will be available in countries as diverse as Singapore, Slovakia, Slovenia and South Africa.

Dr John Kaye: But not Sydenham.

Mr DAVID SHOEBRIDGE: It will not be in Sydenham, Singleton or South Sydney. It will be in Tajikistan, the Tanzania United Republic, Timor-Leste and Togo.

Dr John Kaye: But not Tamarama.

Mr DAVID SHOEBRIDGE: It will not be found in Tamarama.

The Hon. Greg Donnelly: Where is Trevor Khan? Tamworth?

Mr DAVID SHOEBRIDGE: It will not be found in Tamworth. It is a right that will be found in Uruguay, Uzbekistan and Vanuatu.

Mr DAVID SHOEBRIDGE: But it will not be found in Eurobodalla. It will be in Zambia and Zimbabwe.

Mr DAVID SHOEBRIDGE: It will not be in Zetland because this Government is not committed to having those rights for the people of New South Wales. It would be remiss of me in the course of this short excursion through the industrial relations impacts of this legislation to not point out a key feature of the New South Wales industrial relations landscape that has received little, if any, comment in the course of this debate. That point is that public sector workers in New South Wales not only will lose the right to go before an independent umpire; they already have constrained industrial rights.