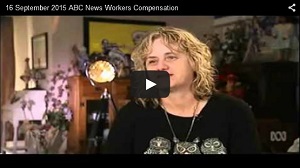 The Cram Fluid Power v Green decision has huge implications for injured workers across NSW who will be prevented from getting access to necessary medical treatment and income support.

The decision states that injured workers will no longer be able to receive additional to lump sum compensation payments if their condition deteriorates over time.

A recent decision in the NSW Court of Appeal, in Cram Fluid Power V Green, means seriously injured workers can no longer top up their initial lump sum payments if their condition deteriorates.

In 2012 the NSW Government, under the former premier Barry O’Farrell, overhauled workers compensation with the aim of reining in Work Cover’s $4 billion deficit.

The changes were heavily criticised because they slashed medical benefits for workers, including people who had lost limbs and hearing.

It makes it difficult when you have to ask someone to help you get your shoes on, I can’t use the bathroom because I can’t get in and out of the shower

Solicitor Steve Groves from Lamrocks Solicitors in Penrith said he had dozens of clients who will now be left without money they were told in 2012 they could continue to receive.

“When the act was amended in 2012 by the then O’Farrell government the workers were told that anyone injured after that date could only make one claim for lump sum compensation for permanent impairments,” Mr Groves said.

“The people that were injured before that date, they were told that they could make one more claim for lump sum compensation,” Mr Groves added.

“They didn’t know they were having their one go.”

In August the Government announced a $1 billion package winding back some of the cuts put in place in 2012. That announcement was welcomed by industry and workers.

But any goodwill the Government received from the August announcement is likely to be lost after this latest development.

Debbie Stewart injured her knee when she fell over on her way to work in 2000 and has been on crutches for more than a decade.

She has had multiple procedures to repair the damage including two knee replacements, the first at age 39, and since then has had a number of revisions.

“Each surgery I’ve had I’ve got more and more reliant on them [the crutches], and now I’ve got problems with my back and my shoulders and my left knee is now playing up because it’s taking the strain of my right knee,” Mrs Stewart said.

“It’s really tough, just having to rely on other people. It makes it difficult when you have to ask someone to help you get your shoes on, I can’t use the bathroom because I can’t get in and out of the shower.”

After the first surgery Ms Stewart received a $40,000 lump sum payment. She was able to go back to work for many years, but has recently stopped because her situation has worsened.

She was about to have her conditions re-assessed to receive a second small lump sum payment.

“But now I’ve been told I can’t claim for another lump sum to cover that injury status,” she said.

Greens MP David Shoebridge is calling on the Government to change the legislation so the scheme does its job and “protects workers rights”.

In a statement, Finance minister Dominic Perrottet said: “The issues raised by the decision of the NSW Appeals Court in the case of Cram Fluid Power vs Green are complex and the State Insurance Regulatory Authority is currently reviewing the findings.

“The NSW Government is continually looking at ways to ensure the workers compensation scheme is fair, sustainable and person-centered.”