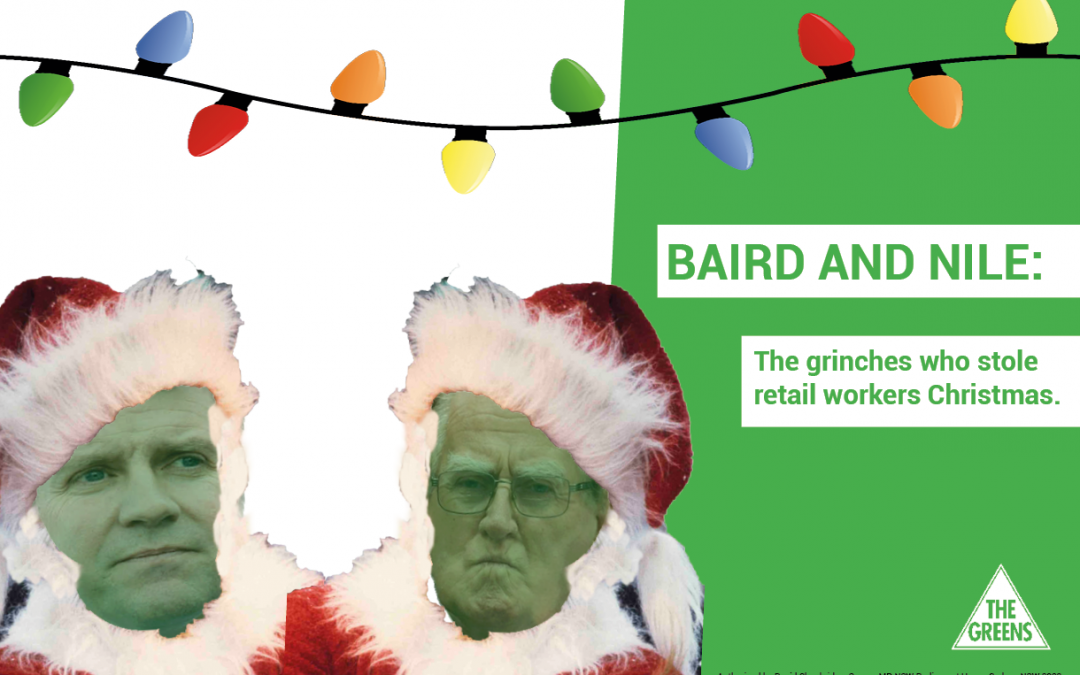 Last night Mike Baird teamed up with Fred Nile to steal half the Christmas holiday from hundreds of thousands of retail workers across NSW.

At the stroke of midnight, the Liberal, National and Christian Democrat parties joined together to amend the State’s retail trading laws to open up all retail stores across the state to Boxing Day trading. As a result hundreds of thousands of retail workers have lost one of their only 4½ days of guaranteed leave throughout the year.

“Baird and Nile are the two Grinches who have stolen half of Christmas from hundreds of thousands of retail workers across the State.

“Public holidays are rare and should always be protected. Last night’s midnight attack on retail workers was a very low blow to some of the lowest paid employees in NSW.

“It is just appalling that a bunch of well-paid pollies ganged up to steal a rare day of rest from one of the State’s low paid workforces.

“It wasn’t just retail workers who had their holidays cut, bank tellers and finance sector workers also lost their bank holiday and many more will also be forced to work on Boxing Day.

“Before last night retail workers only had 4½ days of guaranteed rest, being Easter Friday and Monday, Christmas Day, Boxing Day and half of Anzac Day. After last night’s effort they are down to just 3 and ½ days where they don’t have to work.

“The Greens firmly believe that if politicians are planning to send shop assistants to work on Boxing Day, then every politician should also be forced to come to work.

“This is why we moved an amendment to force politicians to come to work on Boxing Day to see for themselves what a severe impact it has on the end of year break.

“Of course the Government refused to do this with the National Party chair not even allowing the amendment to go to a vote,” Mr Shoebridge said.