War on drugs by other means – the roadside drug testing story 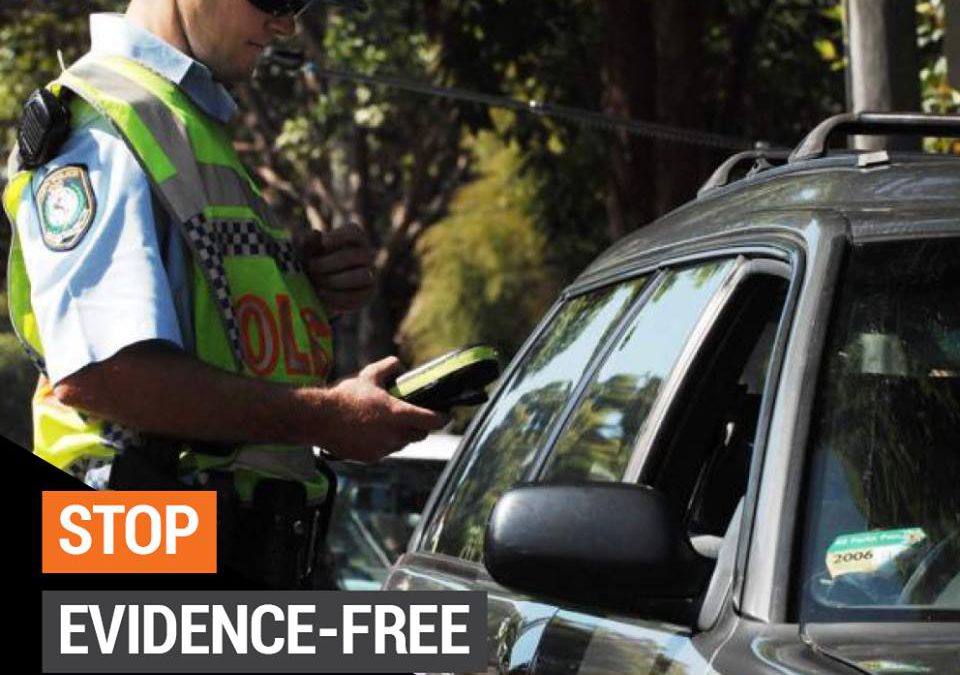 NSW Police continue to target drivers with unfair roadside drug testing. There is increasing evidence that cannabis smoked over a week ago can still show up in your system and trigger a positive test, despite having no impact on your current state of mind. These laws fail to target impairment and are being used as a witch hunt to catch out users.

Listen to David speaking to Hack on Triple J about these unfair laws:

He was also interviewed on 3CR’s program Enpsychedelia. Listen here.

These laws seem to be having a disproportionate effect to those who suffer the most without a licence. The Northern Star reported:

BEXHILL man Matthew Mavay was one of the 46 defendants on drug drivin charges at the Lismore Local Court on Tuesday. The sick rural resident is facing surgery this month.

According to Mr Mavay, he had inhaled on a “crappy leaf joint” the night before testing positive at a roadside saliva test. Although the faint trace of cannabis was not enough to be detected in a second test, three months later Mr Mavey was told a third lab test found cannabis in his system.

His licence was suspended for six months, and at Tuesday’s forum Mr Mavey told the audience about the dire impact of the court outcome on his life.

At one stage he lifted his shirt, exposing his ileostomy bag.

He said he could no longer make medical appointments, drive his mother around or pick up vital prescription medications.

It should be uncontroversial to say that NSW Police road safety measures should be focused 100% on road safety. Not so, it seems, in NSW.

The Baird government and the NSW Police are currently expanding the size of the roadside drug testing program, calling it a road safety campaign. This is despite the fact it is not designed to remove drug impaired drivers from the road, but instead to run a zero tolerance police operation aimed primarily at cannabis. If your driving is impaired by drugs, any drugs, then you should never be allowed behind the wheel of a motor vehicle. It’s that simple.

Unlike random breath testing which is scientifically based and directly related to impairment, the roadside drug testing scheme tests only for the slightest presence of just three illegal drugs: cannabis, MDMA (or ecstasy) and amphetamines. The end result is that people are tested and charged under the scheme for the smallest detectable traces of these drugs in their system, sometimes days after use and well past the time they are impaired by the drugs. Meanwhile others get waved through by police roadside tests despite being substantially affected by drugs that are known to commonly impair driving, like cocaine and benzodiazepines.

Just last week, a court in Lismore acquitted a driver charged with drug driving after he tested positive for cannabis a full nine days after exposure. There was absolutely no chance that he was impaired by cannabis at the time he was charged, and he had previously been advised by police that he should be safe if he waited a week after smoking until driving.

The penalties are substantial – a second offense carries a fine of up to $1100 and loss of license for 12 months. It’s like losing your licence for having a beer the previous afternoon. The penalties are also far steeper than most penalties for the personal possession of small quantities of drugs. The general criminal law has no offence for having drugs present in your system; offences relate to buying, selling or possessing drugs.

As well as wasting scarce police resources, they are also clogging up the court listings across NSW – despite public comments from judges that the roadside testing results don’t provide evidence of any behaviour that endangers other drivers. This is not a fringe occurrence or a small operation. The NSW Police Force will be spending more than $6 million on roadside saliva drug testing kits that they plan to use 100,000 times a year – a 300% increase from current levels.

What we should be doing is following the best evidence and making the kind of policies that will make our roads as safe as possible. The UK Government has already begun this process with a comprehensive report presented to Parliament. The report considers the available evidence including crash data and lab studies to understand which drugs commonly impair driving and at what levels. This report needs to be the starting place for a reform of roadside drug testing in NSW.

The government needs to come clean about what they are doing with the current road side drug testing regime, and tell people it is nothing to do with road safety, and everything about a war on drugs. The Greens firmly believe that any roadside drug testing regime needs to be evidence-based and credible. The end policy outcome is straightforward and is worth repeating: we need to test for all the drugs, legal and illegal, that commonly impair drivers, and test at levels that are known to impair driving.