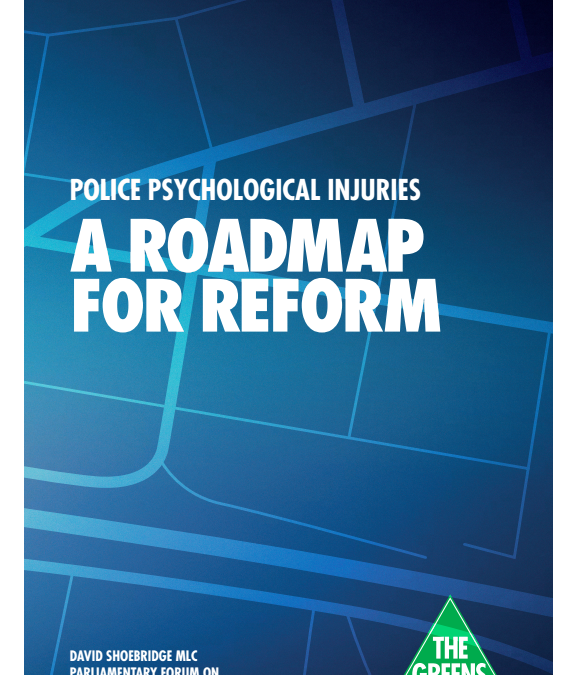 The highly distressing intrusive surveillance we saw of psychologically injured police on 4Corners last night shows exactly why we need a parliamentary inquiry in NSW. If you missed it you can watch it now on iview.

David was interviewed about this today on ABC Illawarra, listen here:

Greens MP and Justice Spokesperson said: “This is a matter we have raised with numerous police ministers, over more than five years. “Making a claim for compensation for an injury suffered at work shouldn’t make you a target, yet that is clearly what has happened to these police.

“Last year the Greens, with support from psychiatrists, lawyers and injured police, developed a ten point roadmap to reform the way police psychological injuries are dealt with.

“Despite its broad support outside government the roadmap has been ignored by the NSW Police and injured police are paying the price.

“The very job of a police officer is to run towards danger, and then when they experience mental illness as a result of what they have seen, they are palmed off to aggressive insurance companies like damaged goods.

“The very nature of policing, which involves the routine exposure of officers to the fact or threat of violent injury to themselves and others, means that one of the most common injuries suffered by police is Post Traumatic Stress Injury (PTSD).

“This is a reality that is often ignored by the Police Force and the insurers and agencies responsible for dealing with injured police. “Clear limits must be established on the use of covert surveillance by insurance companies in relation to psychological injuries.

“Time limits on determining claims, providing certainty and security for injured police, are also essential. “Repeated, often intrusive, surveillance of psychologically injured police aggravates their injuries and it’s a practice that must be stopped.

“The Coalition government happily wraps itself in blue when police are out there fighting crime, but as with all injured workers, once police suffer an injury they fall off the government’s radar.

“We are calling on all parties to support a Parliamentary Inquiry into the treatment of police with psychological injuries, to ensure that we afford them dignified and humane treatment when they are injured in duty,” Mr Shoebridge said.

The proposed terms of reference for our proposed inquiry follow. The Roadmap to Reform can be downloaded from here.

I give notice that on the next sitting day I will move: