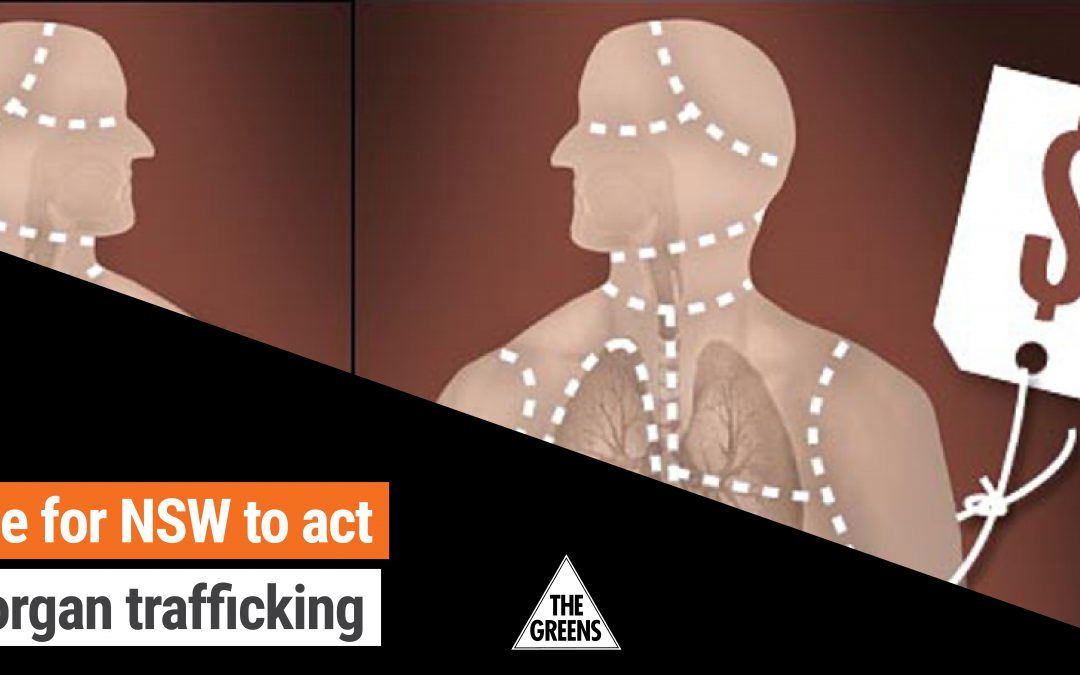 Greens MP and Justice spokesperson will be presenting the Human Tissue Amendment (Trafficking in Human Organs) Bill 2016 to the NSW Parliament on the 10 November 2016.

This bill would make it a crime for citizens of NSW to receive organs sourced by illegal and unethical means, even where this occurs overseas. This includes organ harvesting where organs are removed from people without their consent, and organ trafficking where often poor and vulnerable people are taken advantage of and their organs sold, often resulting in lifelong medical complications. The maximum penalty of 25 years imprisonment will apply where the organs removed could reasonably have been expected to kill the person whom they were removed from.

The global organ trade is growing and with it the temptation for residents of NSW to travel overseas and buy an organ sourced by unethical means. We need to send a strong message that we would not tolerate such behaviour in NSW, and we cannot accept it overseas.

This bill is the result of a consultation process starting in 2013 including community members, lawyers, medical professionals and academics among others.

Benefits of this bill becoming law include:

Contact your local Member of Parliament and ask them to support the bill.

The objects of this Bill are:

(a) to increase the penalty for commercial trading in human organs and other human tissue, and
(b) to create offences relating to the use of organs and other tissue taken from people without their consent, and
(c) to impose a duty on registered health practitioners to report any reasonable suspicion they have that a patient or other person has received an organ or tissue that was commercially traded or taken without appropriate consent.

The offence of trading in tissue or organs has a maximum penalty of 40 penalty units or imprisonment for 6 months, or both. Where the amount of tissue taken would reasonably be expected to kill the person or where a vital organ is removed the maximum penalty is 25 years.

The removal of tissues without consent from a living or dead person has a maximum penalty of  40 penalty units or 6 months imprisonment. Where the organ removed is a vital organ the maximum penalty is 25 years. Using tissues removed without consent or receiving for transplantation tissues or organs so acquired carries matching penalties.

In order to ensure a level of oversight, recipients of tissues or organs overseas (who ordinarily live in NSW) must notify the Secretary of the Department of Health of the transplant.

The bill introduces mandatory reporting for registered health practitioner who have reasonable grounds to suspect that a patient or other person has been transplanted with or received tissue that was either trafficked or removed without consent.

The bill specifies that failure to comply with mandatory reporting requirements is considered “unsatisfactory professional conduct”. This can result in suspension of the medical practitioner from practising medicine or the removal of the practitioner’s name from the Register.

Under the existing law of NSW, trading in tissue is prohibited, but this law does not extend to transplants that may occur overseas. There is anecdotal evidence from medical professionals that residents of NSW have engaged in unethical organ transplants overseas, receiving organs or tissues that were either purchased on the black market or taken from people without their consent.

This was confirmed by the NSW Health Minister in correspondence in January 2013:

Two forces have acted together to make the trade in trafficked organs so lucrative.  First, medical advances have made organ transplantation more widespread, more affordable and more successful.  The second is that across the globe organ donation rates are low and despite the occasional success such as in Spain, have remained low. This means that many people who are waiting for transplants will never receive a matching organ. This can present an incentive for some Governments and organisations to forcibly, or at the very least unethically, obtain organs from their citizens, especially from vulnerable people such as prisoners and minority ethnic and religious groups.

While most countries have laws prohibiting both the sale and forced removal of human organs, evidence suggests that the practice continues to be widespread in a number of countries. This includes countries in our region such as China.

In a number of countries organ sales are disguised as donations with few, if any, records being kept to prove consent to donate organs. This suggests that actual informed consent is at best unlikely. There are also no requirements for ongoing cover of the medical expenses of ‘donors’, and many of those selling organs may be unaware of the ongoing medical issues they can face as a result.

The World Health Organisation has identified organ trafficking as something that “is likely to take unfair advantage of the poorest and most vulnerable groups, undermines altruistic donation and leads to profiteering and human trafficking.” Globally there is strong evidence that it is a billion dollar industry, and continues to grow.