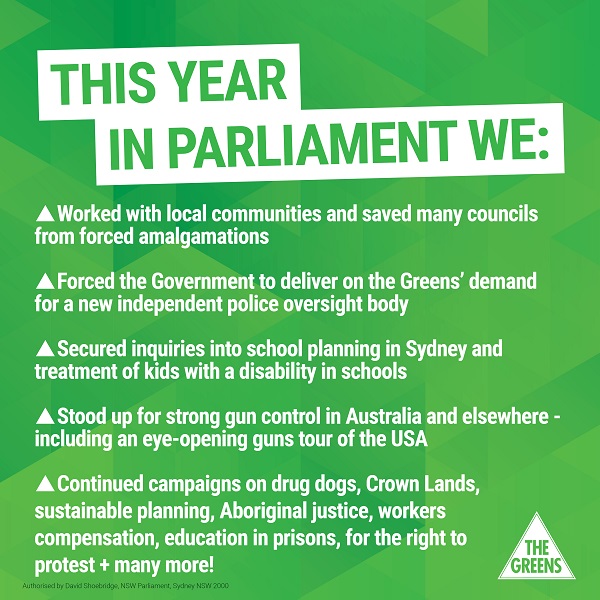 As the year draws to a close we can look back on some of the campaigning achievements of 2016. It has not been an easy year for progressive politics around the world, but here in NSW we’ve had some results worth celebrating.

We have campaigned strongly against forced council amalgamations, resulting in many councils being saved.

Our work secured inquiries into school planning in Sydney, the treatment of kids with special needs in schools and the relocation of the Powerhouse Museum. The work of the inquiry into child protection is also ongoing.

Continued success with “Sniff Off” resulting in lower numbers of drug dog searches, and almost 25,000 people part of the campaign.

We stood with you to defend the right to protect in the face of the Baird Government’s anti-protest laws. We promise to stand beside you if they ever try to use these laws to break up a peaceful protest.

Our campaign for sensible gun control continues, with a blow against the gun lobby seeing the Adler A110 classed as a category D weapon. We also undertook an eye-opening (slightly terrifying) trip to the US to learn from the experience there.

We successfully moved our Steel Bill through the NSW upper house, sending a strong message of support for local jobs and Australian-made steel. We also introduced bills to close loopholes in the Custody Notification Service for Aboriginal people in custody, and a bill to ban citizens of NSW from travelling overseas to receive unethically sourced organs.

There’s still more to do, and we can’t do it without you. Whether it’s saving Sydney’s trees, protecting threatened species, or standing up for vulnerable people – we do it as part of a strong and vibrant community. Thank you.

Wishing you a happy and relaxing holiday season.

This is our 2016 end of year message – if you sign up you can receive this and similar messages directly to your inbox.